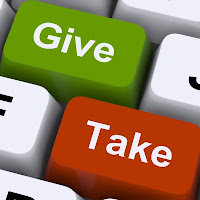 Inexplicably linked to gratitude (and Thanksgiving) is, in my humble opinion, generosity.
I recall a story I once heard about generosity, illustrating how difficult it is to actually put qualities such as gratitude and generosity into daily practice. The story was about a priest who was traveling around the farming community he served, visiting his parishioners. One group of farmers was particularly engaging and he spent some time preaching about the virtues of generosity, charity and kindness. Finally he asked them all to imagine they had one more car than they needed. Then he asked them what they would do with the extra car. One of the farmers immediately responded enthusiastically; “I would give it away to someone who needed it.”
“Now that’s what I call charitable!” the priest exclaimed. “And what if you had two houses? What would you do with the second one?”
“I would give the second one to homeless people,” replied the farmer at once eager to please.
“The spirit of generosity indeed!” the priest smiled with approval. “What if you had two chickens, “ he continued, “what would you do?”
The farmer became suddenly serious. “Why I would keep them both!” he retorted.
“Now why would you, who have been so kind-hearted with great things, all of a sudden cease being generous when it comes to a couple of small chickens?” asked the priest
The farmer replied, “Because I have two chickens!”

Such a great illustration of how we humans can find it so difficult to live according to what we preach – to ‘walk our talk ‘as they say – especially when old emotional fear patterns and self-centredness take over! The thing is when they do, we actually feel uncomfortable, unhappy, because on some level we know we are not living in alignment with our values.

The very good news is that science is repeatedly showing us it’s all in the wiring of the brain – AND we can, by being mindful, actually take charge and change the wiring – be what we really want to be! In the case of the farmer (if he indeed was really as generous as he professed to be) give away that second chicken trusting that ‘what goes around comes around’.

To learn more about coaching and resources that can help ‘change the wiring’, check out www.TheBeingEffect.com
Posted by Jennifer Day at 12:05 PM No comments:

One Thing We Take For Granted

Sitting in a very crowded London tube train the other day, I couldn’t help but overhear two young men – college students – conversing next to me. One of them was describing the gift he was creating for his parents’ anniversary, an elaborately mounted photo collage he clearly found difficult to complete. It sounded like a time consuming project.  “It’s an upgrade of the gift I made for their wedding, I think it will be good enough, don’t you?” he said to his friend. I was curious about the back-story but his obvious care and thoughtfulness over-rode my curiosity. He struck me as being somewhat un-typical of that age group, or of how we normally perceive that age group, and the humbling thought occurred to me that we possibly underestimate young people because of their youth. I immediately felt a surge of gratitude for my own daughter at that age and the constant care and thoughtfulness she exhibited, and still does. I wonder how many of us have someone in our lives who is especially caring, a person who goes that extra mile, but who we don't necessarily remember to acknowledge for it?  This young man on the tube reminded me not only how important it is to recognize young people, but how important it is to shift our focus away from anyone that bothers or upsets us towards those that care, and that show us they care. Won't you join me in appreciating kind, considerate people, of all ages, a little more?
Posted by Jennifer Day at 6:44 PM No comments: