Another Side to Positive Psychology?

A negative side to positive psychology? Could it be? Methinks so. Although a great believer in the power of positivity, (emotionally & mentally), I have always questioned positive psychology as a blanket approach – it doesn’t quite embrace the whole human experience and, I have found, can often cause both frustration and resentment. Imagine then my appreciation when I read not just one, but two recent studies showing a revised perspective!
One study (at the University of Washington) addressed one of my favourite topics: culture. Emotions have a different meaning for people from different cultures, as for example in Asian cultures where a balance of positive and negative emotions is aspired to, (rather than in our Western cultures where we desire a maximum of positive emotions). This particular study compared stress levels, symptoms of depression, and the emotional experiences of Asians, Asian-Americans and European Americans. The findings? That more positive emotions were linked to less symptoms of depression for the two American groups, but NOT for Asians.
The other study (at the University of Warwick, UK & published in the 'Journal of Economic Behavior & Organization') looked at how other people's happiness affects us. The data showed that in countries where the well-being was recorded as higher levels than average, the suicide rate was also higher. The researchers concluded that “Discontented people in happy places may feel harshly treated by life. Those dark contrasts may in turn increase the risk of suicide.”
Wow! There’s some food for thought and discussion!!!

Posted by Jennifer Day at 8:02 AM No comments: 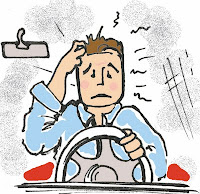 I am fortunate in that the men in my family are mostly quite pc in their attitude to women – with one exception; when it comes to drivers, I don’t know why, but jokes about female drivers still seem to amuse, especially when stuck in traffic. However, a new study is giving me the last laugh! It turns out that men are more inconsistent and dangerous on the roads than women! Why? Because men become seven times more stressed when caught in traffic than women (I repeat, 7 times!) In this most recent study which tested levels of stress hormones in saliva on volunteers stuck in traffic, the levels for women went up by just over 8% while the men’s levels shot up by an alarming 60%! Having got over the shock of this information, I realize however that it is quite understandable considering other studies that have shown us that the male brain responds to stress overwhelmingly with the ‘fight-or-flight-response’, whereas women have more varied stress-responses (including ‘tend-and-befriend’). In this particular study it was found that women handled traffic better by doing simple things like playing music on the radio or CD player, and singing along with it. Ahhhhh – I’ve always known that singing one’s lungs out in the car had a higher purpose! Now I know for sure!
Posted by Jennifer Day at 12:48 PM No comments: