Emotions Determine What We Think! 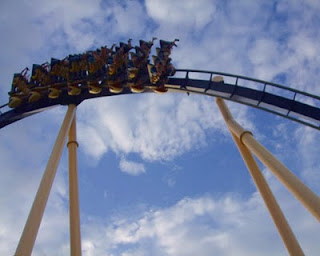 A client of mine, Mike, took his children to an amusement park one weekend. His youngest, four-year-old Kate didn’t remember her previous visit as a baby, so for her it was a completely new experience. The two older boys remembered very well and wanted to go on all kinds of different rides. Kate however, just wanted to go on the rollercoaster, so Mike said he’d go with her. Little did he know the longest wait in the whole park was for the rollercoaster! Mike had many virtues, but patience wasn’t one of them. He absolutely detested standing in line, but he did like to keep his word so they stood in line for a little while. Soon he predictably became impatient and began looking around for something else they could do instead. He tried to persuade Kate that the rollercoaster really was no big deal, but Kate was adamant and they waited some more. Finally Mike started trying to tempt her with other rides and things he knew she liked.  Eventually, he became so impatient and irritated he offered her a bribe, something that went totally against his value system and the way he wanted to parent; “If we go on another ride instead,’ he cajoled, “I’ll give you an extra ice-cream!” He was feeling pretty disgusted with himself, but somehow just couldn’t seem to help himself. To add insult to injury, Kate was not having any of it. She turned her little face up to her father and said ‘Dad, I have waited my whole life to go on a rollercoaster, I’m not going to give it up now!’
Mike looked down at his spunky little four-year-old with her tiny hands on her hips, looking up at him as if this was an issue of national importance! At first he just stared at her, incredulously. Then he felt the urge to laugh, and then suddenly, a surge of love for his little girl welled up in him. His feelings instantaneously shifted from annoyance and almost anger to love and laughter. When recapping the story to me, he concluded; “And you know what? After that we could have waited in that line all day and I wouldn’t have cared!”

To read full Article, go to http://bit.ly/cJhQFY
Posted by Jennifer Day at 2:11 PM